Horizontal fragmentation consists of a subset of the tuples (row) of a relation. It contains from the tuple of the global fragment and then divided into different subset. In other words, it groups the tuples of a table in accordance with the values of one or more fields. This type of fragmentation should also confirm the rule of constructiveness.

The process of fragmentation of a table based on the constraint defined on another table. Both of the tables are linked to each other with the help of the primary key and the foreign key and must establish owner-member relations. This fragmentation is used when we want to horizontally fragment a table that is not dependent on any other owner table.

It generates a set of horizontal fragmentation, which includes every table of the original relations. Completeness is required for the reconstruction of relations so that every table belongs to at least one of the partitions.

It generates a set of horizontal fragmentation in which no two fragments have common tables. In other words, every table of relation belongs to only one fragment.

There are two alternative ways of hybrid fragmentation can be done: 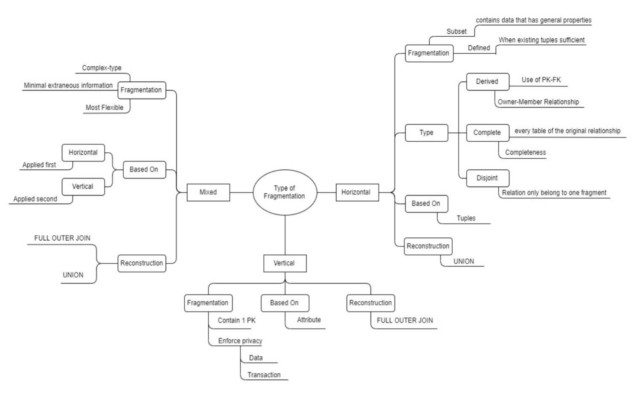