For system implementation in project closure, there are 3 approaches that can be choose by team:

The parallel approach to implementation allows the old and the new product or system to run concurrently for a time. At some point, the organization switches entirely from the old Target date Old system New system to the new. The parallel approach is appropriate when problems or the failure of the product or system can have a major impact on the organization.

For example, an organization may be implementing a new accounts receivable package. Before switching over completely to the new system, the organization may run both systems concurrently to compare the outputs of both systems. This approach provides confidence that the new system is functioning and performing properly before relying on it entirely

Following the phased approach, the product or system is released in modules or in different parts of the organization incrementally as illustrated in picture above. For example, an organization may implement an enterprise resource planning (ERP) system by first purchasing and installing the general ledger component, then accounts payable and accounts receivable, and so forth. The phased approach may be appropriate when introducing a software system to different areas of the organization. When upgrading an operating system, for example, the IT department may perform the upgrade on a department-by-department basis according to a published schedule. 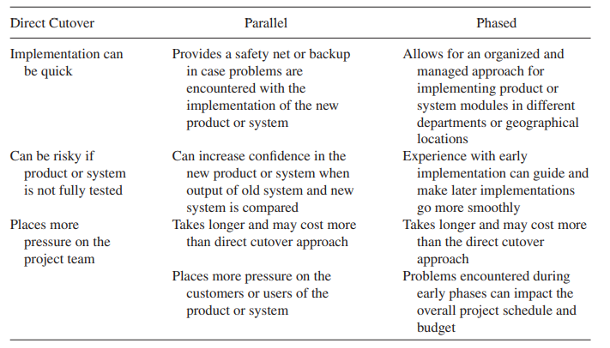