Why the need a disaster management study ?

Concept of the disaster management can be divided into : the Natural Disaster and Man-made disaster. The term “natural disaster” refers to those disaster that are triggered by natural phenomena. These phenomena are known technically as natural hazards. In recent years, a special type of natural disaster has begun to occur more frequently. This disaster is environmental degradation. It results typically from poor farming, grazing, or settlement practices or because of demands for fuel wood.

Excessive exploitation of natural resources or improper use or maintenance lands change the ecological balance; the resulting effects of deforestation, desertification, erosion, siltation, or flooding often bring disaster. Primary examples are increased flooding  due to overgrazing or poor farming practices in the upper portions of watershed, and increased desertification resulting from overgrazing or improper use of water resources. 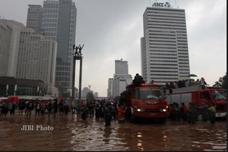 The term “man-made disasters” usually refers to disasters resulting from man-made hazards. Man-made disasters can be divided into three categories : armed conflict, technological disasters, and disasters that are not caused by natural hazard but that occur in human settlements.

Armed conflicts and Civil Strife is disaster management concerns itself with various aspects of armed conflicts and civil strife including the protection and support of displayed persons and refugees during the conflict; physical and economic reconstruction; and social rehabilitation in the aftermath of the conflict.

Disasters are not totally discrete events. Their possibility of occurrence, time, place and severity of the strike can be reasonably and in some cases accurately predicted by technological and scientific advances. It has been establish there is a definite pattern in their occurrences and hence we can to some extent reduce the impact of damage though we cannot reduce the extent of damage itself. This demands study of disaster management in methodical and orderly approach. (tp / 19-05-2014)