Status condition’s convention name helps identify valid states. Status condition might be simple, so we can give the name of its status in an understandable name such as Off or In Repair Progress. Names consisting of gerunds or verb phrases can be given in other states which are more active, such as Being recorded or Printing. For example, a specific Sale object in a restaurant comes into existence when a customer orders something. Right after it is created, the object might be in a state called Adding new order, then a state called Waiting for orders to be served, and at the end, when all orders have been served, a state called Completed.

An object cannot move to another state until some event causes it to do so. Analysts use the mechanism as a result of the combination of states and transitions between states to capture business rules. The information which is captured and documented in a UML diagram called a state machine diagram.State machine diagram can be defined as a diagram showing the life of an object  in states and transitions.

Figure below shows the notation of state machine diagram: 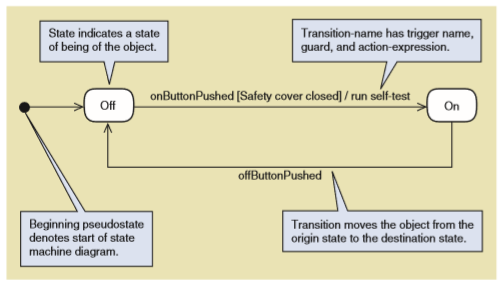 Here is the 8 steps to get started in developing state machine diagram (Satzinger, Jackson, and Burd, 2012):