GREEN IT: Virtualization for Cloud Computing

Virtualization emerged in the mainframe era as a practical solution to help IT departments make better use of their investments in enterprise-grade hardware, such as high-performance computers, servers, and storage. These machines could handle more workload than a typical application required, so the idea of running virtual machines, each performing discrete tasks, on a single piece of hardware, was appealing (Walcik, 2012, rackspace.com).

Virtualization is a layer of software that improves the management resources. It conserves resources and makes some aspects of computing operationally smoother, but it doesn’t relieve any of the responsibilities of IT. In fact, it adds one—managing virtualization itself. Nor does it provide self-service, elasticity, or automation for business users and developers (Walcik, 2012, rackspace.com).

That’s the purpose of virtualization – to do more with less. Virtualization increases computing power in a datacenter without a correlated rise in energy usage. It achieves this by taking the computing processes that otherwise require separate physical servers and consolidating them into virtual operating environments that are running on fewer servers. For every virtualized server, between three to five physical servers can typically be retired. An additional benefit is that virtualization shrinks how many backup servers are necessary for planned or unplanned downtime (Singh, 2008).

Virtualization makes it possible to shift computing processes within a datacenter, from one location of servers to another. If this is not managed carefully, computing loads can unexpectedly become too localized in one area of the datacenter. Power consumption and heat dispersal can rise sharply, straining a facility’s support infrastructure. This leads to a lack of efficiency and increases the risk of overloading or outages (Singh, 2008). 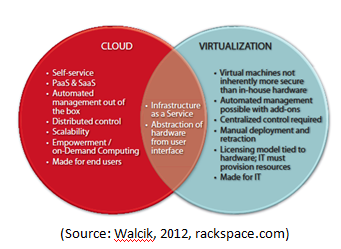 The cloud is as much a philosophy as a technology, and it’s quite different from the philosophy that informs virtualization. The two should never be confused, but that doesn’t mean they can’t be combined. Managed private cloud services combine the flexibility of the cloud with the dedicated resources and customization capabilities of virtualization.

Deciding between cloud computing and virtualization:

Virtualization has three characteristics that make it ideal for cloud computing: (1) partitioning: in virtualization, using partition to support many applications and operating systems in a single physical system, (2) isolation: each virtual machine is isolated, each machine is protected from crashes and viruses in the other machines, and (3) encapsulation: protect each application, it doesn’t interfere with other applications. Using encapsulation, a virtual machine can be represented (and even stored) as a single file, making it easy to identify and present to other applications (Hurwitz, dummies.com).